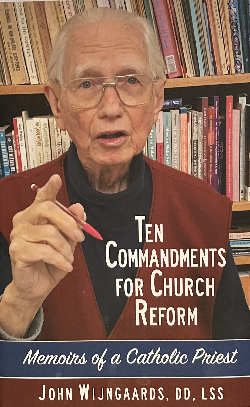 John Wijngaards has written his memoirs detailing how he was brought to the position where “in conscience” he could no longer function as a priest within the Roman Catholic Church.  His book is entitled, Ten Commandments for Church Reform (Acadian House, 2021).  This title is misleading.  His subtitle, Memoirs of a Catholic Priest, gets closer to describing his content.  Had I been his publisher, I would have suggested, Memoirs of a Catholic Priest Bent Upon Reforming his Church.

I find a strong affinity with Wijngaards.  We are roughly the same age.  We both grew up in a pious Catholic family.  We were both immersed in Catholic devotions.  Reflecting on this early period in his life, Wijngaards writes, “Looking back at that time, I now recognize an element of unreality in my obsessive devotion [to Jesus]” (p. 47).  I would say the same thing, but, for me, it was “my obsessive devotion to Mary.”  The “unreality” in my own devotions consisted in my adamant conviction that my daily rosaries formed the “essential spiritual warfare” enabled the Blessed Virgin Mary to bring about the conversion of Russia.  Wijngaards says, “I had fallen in love with a phantom Jesus”—a Jesus who wanted me “to be wary of woman” as a danger to my spiritual life.  Here, too, this has a resonance in my own early spirituality.

As a result, Wijngaards joined the Mill Hill Missionaries. He completed his high school and college years in Mill Hill institutions.  Then, his superiors sent him to the Gregorian University in Rome to get a doctoral degree in Sacred Scripture.  My guess is that, as his studies of the Gospels began, the “phantom Jesus” of his devotional period was replaced by the Jesus of the Gospels.  Then he was ordained and sent to Hyderabad, India, where he taught Scriptural Studies to future Indian priests, 1964-1976.  These were exciting times to be a priest.  In 1962-1965, Vatican II had provided Catholics with an upbeat plan for reorienting religious and priestly life.  Religious vocations abounded everywhere.

It is significant, for me, that Wijngaards founded a formation center for Religious Sisters precisely because these women were routinely sent out to do pastoral work without having any substantial theological training.  Here I notice quite clearly that Wijngaards took measures to uplift the women in the Church of India who were prized for their unpaid labor, their humility, and their submissiveness.  This was not an assignment given to him.  John Wijngaards was clearly not a “yes” man waiting for someone to tell him what to do–when he saw something that was not quite right, he stepped up to the plate and began to do something by way of correcting it.  He exhibited a “can-do attitude.”  What I find significant is that, right from the very start, he exercised his talents in favor of women.

In the ten years following Vatican II, women were entering into all the professions that had been formerly been reserved exclusively for men.  The Women’s Rights Movement, meanwhile, was dedicated to securing for women equal access to education and employment, equality within marriage–married woman were given the right to own property, to have bank accounts, to receive wages, to have custody over her children and control over her own body.  The Society of Biblical Literature was 98% male in the early 1960s.  Year by year, this Society saw a growing influx of female theologians.  Meanwhile, Catholic Colleges and University began hiring qualified female theologians.  For a number of years, the chances of being hired by a Catholic institution was decidedly higher if you were a woman.  By the 90s, nearly 40% of the members of the Society of Biblical Literature were female.

During these same years, Wijngaards offers his readers (p. 121-126) a full-blown analysis of how, in Holland, Paul VI appointed bishops with the deliberate purpose of destroying the harmony and collaboration between the Dutch bishops. In 1972, Fr. Joannes Gijsen was named bishop of Roermond. In so doing, the pope entirely bypassed the honored Dutch tradition whereby episcopal candidates were drawn from a list generated by a diocesan synod. Cardinal Alfrink, Archbishop of Utrect, went to Rome to contest this “disregard” for a long-standing nomination procedure, but without success.  Fr. Gijsen had the reputation of having “a negative and destructive personality,” and, in quick order, he undid all the Vatican II reforms that had been joyfully and painstakingly embraced by the vast majority of Dutch Catholics in his diocese.  In addition, he created his own seminary since he did not trust the formation in the common seminary to be sufficiently orthodox.  Wijngaards tells his readers: “The reaction to his appointment was one of outrage” (p. 122).

Wijngaards gives a hint of his future decision to resign from the ministry half-way through the book.  He reports on a radio interview given by Bishop Simonis (another bad appointment by Paul VI).  The bishop was asked how he understands the CDF’s rejection of women to holy orders.  His response: “Men are active, [they] are leaders by nature. Women are passive.”

“How do you know this,” the interviewer prodded him.

“Well,” he said. “Look at what happens right at conception.  The female ovum is lying passively in the womb, the male sperm fights its way in and captures the ovum with a sting” (p. 123).

Besides his dubious portrait of the biology of conception, Simonis uses this mental picture to justify his bold generalization that “men are active by nature; women are passive.”  Clearly anyone who would say something like this has had little or no experience of a fierce women like Wijngaards’s mother.  Nor, for that matter, can we really believe that Simonis never met any “passive men.”  Not even the CDF would try to get away with this sort of shoddy thinking.  The bishop’s prejudice against women was showing through.  No doubt about it.

For Wijngaards, the 1995 attempt by John Paul II and Ratzinger to make the ban against women appear to be “infallible” was the final straw that broke his resolve to continue his official ministry.  Wijngaards specifically details how John Paul II and Cardinal Ratzinger–by permanently denying the priesthood to women–delivered a crushing blow.  As Housetop in London and even in the missionary field in India, Wijngaards was accustomed to working with women who were outstanding and competent.  Anyone who reads the opening chapters of his book will notice also that his own mother was a fierce tigress when it came time to keep her family together and alive during the period when they were sequestered in detention camps by the Japanese. In an era where humility and subservience were routinely prized as the virtues of women, Wijngaards was rescued from the jaws of death by a woman ready to face down ruthless soldiers who were accustomed to using acts of cruelty to intimidate the vast numbers of prisoners that were under their supervision.

Wijngaards was especially creative and visionary in the missionary field of India where he spent the better part of fourteen years.  Even after Ivan Illich (p. 115) wrote his stunning report on the failure of European priests to step aside and to give native-born priests the full responsibility for the missionary outreach in their own countries, Wijngaards immediately recognized the appropriateness of this appeal, and he began to take steps to implement the very measures that would render his own religious order as “no longer needed.”  From my reading of Wijngaards’ narrative, however, I would judge that this had little or nothing to do with his leaving the priesthood.

Wijngaards himself omits this when he announced his resignation in 1998.  At that point, he fingers exclusively his “conflict of conscience” as necessitating his leaving.  Here are his words:

Since I perceive Rome’s ban on women’s ordination (a) as not legitimately founded on Scripture or Tradition, (b) [as] not arrived at after proper consultation of the Church, (c) [as] harmful to ecumenism, and (d) [as] highly injurious to the spiritual wellbeing of the faithful, I feel bound in conscience to continue voicing my sincere opposition. . . .  Moreover, (e) I want to stand on the side of those men and women who are so casually and unjustly dismissed by the Vatican.  It is only by distancing myself now from the institutional Church that I can extract myself from the guilt of taking part in the conspiracy of silence.

Notice here how Wijngaards lists the four defects of Rome’s ban on ordination.  (a) and (b) deal with the failure of the CDF in doing its homework.  (c) and (d) name the chief harmful consequences.  (e) appears as an afterthought but, in reality, it is the “Here I stand. I cannot do otherwise” statement of Martin Luther when he was asked to recant his positions.  Wijngaards puts emphasis upon the “conspiracy of silence” of bishops, theologians, priests at all levels who, instead of speaking out forcefully, have retired in silence thereby deceiving the faithful and leaving the prophets to take on the brutal and inhumane treatment of the CDF alone.  This last item is extraordinary.  Wijngaards is challenging the “guilty bystanders.”  Do recall that  John Wijngaards was never interrogated by the CDF regarding his writings.  Nor was he ever silenced and prevented from teaching or publishing on the “hot button” topics that were being defined by Rome.  It would have been very easy for him to join the “guilty bystanders” who tacitly enabled the tyranny of the CDF, but he did not.

Wijngaards makes clear that his leaving ministry within his Church was a manifest protest against the “conspiracy of silence.”  This leaving, however, did not diminish his priestly mission as he saw it: “Christ wanted me to continue as a priest for those who sought my help and as a prophetic teacher in a Church so badly in need of reform” (p. 229).  Wijngaards discovered that the professional team working with Housetop Ministries (his innovative catechetical works) wanted to follow his prophetic move by creating world-wide resources whereby the issue of women’s ordination would be thoroughly researched and discussed [URL = http://womenpriests.org].  Thus, the past twenty-four years have been filled with his continued ministry on behalf of women.

If you go to HypeStat.com, you will discover that http://womenpriests.org has an average of 435 unique daily visitors and 1131 daily page views.  Quite clearly, http://womenpriests.org is a resource center to be reckoned with.  In the past eight  years, Housetop evolved into the world-renowned Wijngaards Institute for Catholic Research which coordinates leading academics to publish research projects on issues facing the international Catholic community.

For anyone who believes that the Roman Catholic Church has a future in God’s divine plan, I would strongly recommend John Wijngaards’ Memoirs.  For anyone who thinks that John Wijngaards choices are driven by pride or by the promptings of Satan, his Memoirs have much to offer you as well.  It is a positive sign that the Mission Hill Fathers published a strongly supportive review on their official website.  His hardback book can be purchased for $23 directly from Acadian House Publishing.  For a $10 Amazon Kindle version, click here.   For a review by Fr. Flannery, click here.