On 14 January 2022, Thomas J. Olmsted, Bishop of Phoenix, alerted all the faithful regarding a matter of grave importance.  In his own words:

“It is with sincere pastoral concern that I inform the faithful that baptisms performed by Reverend Arango, a priest of the Diocese of Phoenix, are invalid. This determination was made after careful study by diocesan officials and through consultation with the Congregation for the Doctrine of the Faith [abbr: CDF] in Rome.” 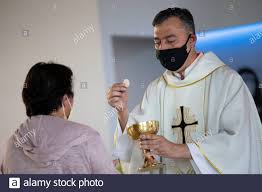 Father Arango acknowledged to his bishop that, for the past fifteen years, he had been performing baptisms in four different parishes using the words, “We baptize you in the name of the Father. . . .”  Since the official rites of the Roman Catholic Church indicate that baptism is administered using the words, “I baptize you in the name of the Father, and of the Son, and of the Holy Spirit,” Bishop Olmsted judged that the use of “we” instead of “I” had the effect of invalidating thousands of baptisms.

Are we really obliged to believe that all of Father Arango’s baptisms were invalid?  Bishop Olmsted says,

“Unfortunately, we have no choice but to repair the mess made by Father Arango.”

The CDF, in an official ruling, agreed with the Bishop, “Without the right words, the Sacrament is invalid.”

Let’s step back for a moment and examine this case more closely:

In the Acts of the Apostles, thousands of baptisms are described.  At no time does the sacred text indicate what words (if any) were used to administer the rite.  Must we then doubt the validity of these baptisms (as the CDF proposes)?  Hardly.  At this historic time, baptism was being administered by immersion in water.  The repeated use of the Greek term, βαπτίζειν (baptizein), means “to immerse in water.” The only requirement for baptism was the conversion of heart.  In a typical case Peter says: “Repent, and be baptized every one of you in the name of Jesus Christ” (Acts 2:38, 8:16, 10:48, 19:5; 1 Cor 1:13; Gal 3:27).

Matthew alone reads, “in the name of the Father and of the Son and of the Holy Spirit” (28:19).  Vööbus points out, however, that Eusebius (d. 340) cites the great commission of Matthew more than two dozen times as “teach all nations in my name” (1968:36).  It is quite probable, consequently, that Eusebius’ text of Matthew’s Gospel did not have a trinitarian formula and that this was later edited into copies of Matthew’s Gospel.  All in all, most scholars are in agreement that baptism “in the name of Jesus” was the earliest norm and that this norm gradually shifted toward baptism “in the name of Father, Son, and Holy Spirit” (Did 7:3) in the early second century.

Moreover, theologians generally agree that Matt 28:19 gives us a rubric without in any way implying that these are “the words that must be recited to make the immersion a valid baptism.”  No one in this period imagined that, at every baptism, divine grace does not flow unless “the required words” were said.  The judgment of the CDF, “Without the right words, the Sacrament is invalid,” is thus a ruling that finds no foundation whatsoever within early church practice.   [For more details, click here.]

In the Eastern Catholic Churches of the Byzantine Rite, immersion or submersion is used, and the formula is:

“The servant of God, [insert name], is baptized in the name of the Father, and of the Son, and of the Holy Spirit.”

The Eastern Churches acknowledge the validity of Roman Catholic baptisms even though they do not require full immersion or their normative words.  Roman Catholics likewise acknowledges the baptismal traditions of the Eastern Churches.  These accords  recognized that there is essentially only “one baptism” even while there is a “legitimate diversity” in how these baptisms are administered.  Is the CDF aware that insistance upon one form of baptism might effectively undercuts the “mutual recognitions” made with the Eastern Churches?   [Click here for more details.]

The plural form “we” includes the singular “I”; in fact, it is impossible to use “we” in a way that excludes “I.”

If Bishop Olmsted had known this, would he have pounced upon Fr. Arango the way he did?  Did Bishop Olmsted destroy the reputation of Fr. Arango unjustly?  Did he grievously error in making a mountain out of a molehill?  Yes and yes.

Judith Hann assists us here in making a careful study of how Thomas Aquinas regards situations in which the minister uses alternate words.  This study was published by Cambridge University Press on behalf of Ecclesiastical Law Society in 2021.  Without going into the details, here are the conclusions that Hann brings to us:

Aquinas . . . does not adhere to a radical literalism with regard to sacramental formulas. Instead he refers to the intention [of the minister] to do what the Church does and to the meaningfulness of the sacramental act for those who participate in it. In doing so, he proves that his understanding of sacramental speech is less that of spells with a magical automatism and more that of communication. Understanding sacramental speech as communication, as acts of conveying sacramental meaning to the community, demands a greater tolerance with regard to wording.  (Source)

What does this say regarding the “radical literalism” being proposed by the CDF?  Two points: (1) The CDF judged the minister using “We beptize you . . .” too harshly.  These words, in and of themselves, do not clearly reveal an intention to deviate from what the Church intends by the rite; and (2) The CDF appeals to Aquinas, but, in so doing, the CDF mistakenly assumes that Aquinas affirms the “radical literalism” that the CDF wants to impose on all ministers of baptism.

When I was taking my first course on the Sacraments some sixty years ago, it was pointed out that the “intention” of the minister decides the outcome.  Thus, if in case of an emergency, a young mother baptizes her infant son who has turned blue and has stopped breathing, and she uses the words, “I baptize you in the name of God and of Jesus,” this suffices as a valid baptism.  How so?  Because she intends to do what the Church has done, namely, to baptize her son.  The Church tacitly supplies what is missing.  This principle is called Ecclesia supplet, which in Latin means “the Church supplies.”  If Bishop Olmsted had remembered his first course in Sacraments, might he not have used this principle to dispel any fear that the case of Fr. Arango involved any invalid baptisms.  Bishop Olmsted declares,

“I do not believe Fr. Andres [Arango] had any intentions to harm the faithful or deprive them of the grace of baptism and the sacraments.”

That’s all that is needed.  Ecclesia supplet. All of the baptisms of Fr. Arango are valid.  There is no mess to clean up.  That’s the good news for everyone involved!  But the Bishop is unable to see this.

As things now stand, a grave danger is about to erupt.  An overly zealous and marginally incompetent bishop has set the wheels going in the direction of finding those who are the victims of “invalid baptisms” and making arrangements to have them repeat their baptism.  Then they will, in most instances, have to repeat their confirmations and marriages as well.  At this point, only one priest has his reputation ruined.  I would estimate that once Catholics come to understand that they too might be invalidly baptized, then more priests will be called on the carpet.  More reputations will be shattered.  Meanwhile, overworked priests will be required to give time and attention to thousands of Catholics who fear that their baptisms were invalid.  Many more thousands will come forward and ask to be conditionally rebaptized “in order to give themselves peace of mind that their spiritual welfare is secure.”

Meanwhile, Fr. Matthew Hood in the Archdiocese of Detroit has admitted that he discovered, upon seeing a family video of his baptism, that his own baptism was invalid.  So he was rebaptized, reconfirmed, reordained.  Now he is anxious because he is aware of the fact that he administered hundreds of Sacraments without recognizing that most of them were “invalid” because he himself was “invalidly” ordained to begin with.  Yipes!  So here is another overly zealous and marginally incompetent priest who is spreading uncertainty and fear.  How many more will come after him?  [Click here for further details and discussion regarding Fr. Hood.]

Parce Domine!  [Spare us, O Lord!]  Someone in authority needs to come forward soon and expose the false judgment of the CDF and the incompetent pastoral solution championed by Bishop Olmsted.  The faithful need to be reeducated as to why ALL THEIR BAPTISMS WERE VALID ALL ALONG.  Fr. Arango can then be reinstated.  He can undertake the new task of wiping away the tears of all those Catholics who were horrified by the false alarm and the sleepless nights.  The mountain can finally be seen again as just a molehill.

Peace and joy in the Love of our Lord,

PS: Further analysis of wooden repetition and the theology of baptism.

8 thoughts on “Invalid Baptisms?—How Bishop Olmsted Made a Mountain out of a Molehill”