Reform of the papacy intended by Pope Francis

The prior of Bose, Enzo Bianchi, and archbishop emeritus of San Francisco John R. Quinn are presenting it as a given that Francis will completely overhaul the role of the pope. But some acts of this pontificate contradict their expectations. 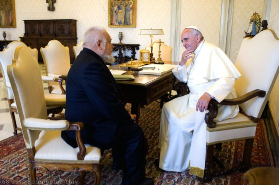 VATICAN CITY, August 7, 2014 – There are those who maintain, and even say they are certain, that Pope Francis wants to reform the papacy to the point of “destructuring” the role of the Roman pontiff as it was developed in the second millennium of the Christian era, beginning with the Gregorian reform and continuing through the magisterium of the Council of Trent and of Vatican I.

This seems to be the gist of two significant declarations that have come in recent weeks.

On July 23, after Pope Francis appointed him as a consultant for the pontifical council for the promotion of Christian unity, Bianchi released shattering statements to the website Vatican Insider.

The position that the prior of Bose received is not of great significance in itself. But it received enthusiastic coverage in the media, given the vast influence of Bianchi’s words in the Catholic world – and not only among progressives – and his regular contributions to the front pages of important Italian secular newspapers like “la Repubblica” and “La Stampa.”

But there have been few critical observations on the promotion – in the Vatican dicastery that deals with ecumenical dialogue – of the founder of a monastic experience that already presents itself as interconfessional, with a Lutheran among its long-standing members, highly open and friendly toward the Protestant and Orthodox but intransigent and disdainful with the traditionalist Lefebvrists, the only ones for whom it reserves the label of “schismatic.”

Particularly tough was the commentary of Msgr. Antonio Livi, a former dean of the faculty of philosophy of the Pontifical Lateran University, who went so far as to accuse Bianchi of attributing his own musings to the pope.

But what did Bianchi assert that was so explosive?

The prior of Bose told Vatican Insider that he thinks “the pope wants to achieve unity also by reforming the papacy, a papacy no longer feared in the words of ecumenical patriarch Bartholomew, with whom Francis has a bond of friendship.”

Explaining that the reform of the papacy means “a new balance between synodality and supremacy,” Bianchi added:

The Piedmontese monk then evoked an innovation that could also have a practical translation. He said that the synod of bishops “has been around since the Second Vatican Council,” that the council of nine cardinals who assist Francis in the reform of the curia “was the pope’s idea,” but added that there is a possibility in the future of “an episcopal organization that would assist the pope in governing the Church without calling papal primacy into question.”

We now come to the other attestation on Jorge Mario Bergoglio’s intentions concerning a reform of the papacy.

Here the protagonist is the American archbishop John R. Quinn, 85, head of the diocese of San Francisco from 1977 to 1995 – when he wanted to leave at the age of only 67 partly in the wake of sexual abuse that had involved a couple of his coworkers in the diocesan curia – and president of the United States episcopal conference from 1977 to 1980.

On July 7 Quinn told the American newspaper National Catholic Reporter that Bergoglio said to him, a few days before the conclave that saw him ascend to the see of Peter:

“I’ve read your book and am hoping it will be implemented.”

The book by Quinn that Cardinal Bergoglio read and approved of dates back to 1999 and is entitled “The Reform of the Papacy: The Costly Call to Christian Unity.”

The volume presents itself as a reflection on the 1995 encyclical by John Paul II “Ut Unum Sint.” An encyclical, according to the author of the book, “clearly in rupture with the past and in many aspects revolutionary,” in that “it extols the synodal model of the Church of the first millennium and insists on the fact that the pope is a member of the college of bishops and that primacy must be exercised in a collegial manner.”

“Ut Unum Sint” in short – still according to Quinn – “testifies to the fact that accepting Vatican I and its teaching on the primacy of jurisdiction does not exclude a broader understanding of primacy” and “makes it clear that Vatican I was not the last word.”

From this postulate Quinn derives a series of concrete proposals concerning the governance of the Church.

With regard to the episcopal conferences for example, in spite of the restrictive norms contained in the 1998 motu proprio on their theological and juridical nature, Quinn maintains that they are to be considered a true realization of episcopal collegiality and have a real magisterial and even doctrinal role.

Concerning the synod of bishops, he indicates the need to remove this from the control of the Roman curia, excluding the automatic inclusion of dicastery heads.

Regarding the appointment of bishops Quinn hopes, with respect for the “authentic ecclesiology” of Vatican II, that the role of nuncios in the selection of candidates will be drastically reduced, giving a preeminent role instead to the bishops of the relative ecclesiastical provinces and in subordination to the presidents of the episcopal conferences.

In practice, therefore, “the list of names selected by the bishops should be sent to Rome directly by the archbishop of the metropolitan province, with the indication of the agreement of the president of the conference,” while “there should be no discussion about the list between the bishops of the province and Rome,” much less any role of the nuncio. And if Rome were not to find itself in agreement about the list, “this should be sent back to the province for further consideration and amendment.” To all of this should be added a substantial involvement of priests and laypeople, but without any politicization, factionalism, and breaking of confidentiality.

These new modalities in the election of bishops would serve – still according to Quinn – to obviate the “grave problems” raised by the current procedures. And he cites the delay in filling vacant sees, the excessive “emphasis” on selecting candidates who provide doctrinal reliability, the transfer of a bishop from one see to another, the multiplication of auxiliaries.

Quinn also maintains that exclusivity in the election of the pope should be removed from the college of cardinals. He suggests admitting to the conclave the patriarchs of the Eastern Catholic Churches, without bestowing the scarlet on them, having at least a few presidents of the episcopal conferences participate in the vote, and allowing significant lay organizations to indicate to the electors the qualities that they would like to see in the new pope.

Finally, for Quinn, one crucial issue in a reform of the papacy aimed at Christian unity is not only that of centralization, but also that of the reform of the Roman curia.

A Roman curia that above all should have fewer bishops and fewer priests. And in this regard Quinn brands as “an abuse of the sacrament of sacred orders and the office of the bishop” the fact that secretaries of the Vatican dicasteries are systematically elevated to the episcopal dignity.

So these are the reforms that Quinn was hoping for at the end of the last millennium, the ones that then-cardinal Bergoglio, on the eve of the 2013 conclave, is alleged to have said – according to Quinn himself – that he wanted to implement.

The question arises naturally. Now that Bergoglio has become pope and has the power to do it, what intention does he have of promoting, fostering, and even imposing the application of these reforms?

Some of the decisions that Francis has made so far seem to move in this direction, like the creation of the council of nine and the reinforcement of the synod of bishops.

But others move in the opposite direction, like the continual elevation as bishops of secretaries not only of the curial offices, but also of the governorate and of the synod itself.

With regard to the delicate question of episcopal appointments in the dioceses – a topic that was touched upon at the last meeting of the “C9” – it is not known if the practice indicated by Quinn has or has not begun to be implemented in Argentina. What is certain is that none of the numerous episcopal provisions in that country from March of 2013 until now has undergone the scrutiny of the members of the congregation for bishops at the Vatican. Just as the appointments to the dioceses of Isernia and Locri in Italy did not undergo its scrutiny.

In Argentina, in addition to his successor in Buenos Aires, Pope Francis has made about twenty other episcopal appointments, eight of which (seven after an unexplained resignation between the publication of the appointment and the consecration) however concern auxiliary bishops. In this field as well, therefore, the Argentine pontiff does not seem to want to follow the indications of Quinn’s vaunted book.

But we are less than a year and a half from the beginning of the pontificate. Too soon to understand how far Francis would like to push in an actual reform of the papacy.   (source)

The article in the “National Catholic Reporter” with Quinn’s statement relative to Bergoglio:

> Quinn to priest group: Church poised at a moment of far-reaching consequences